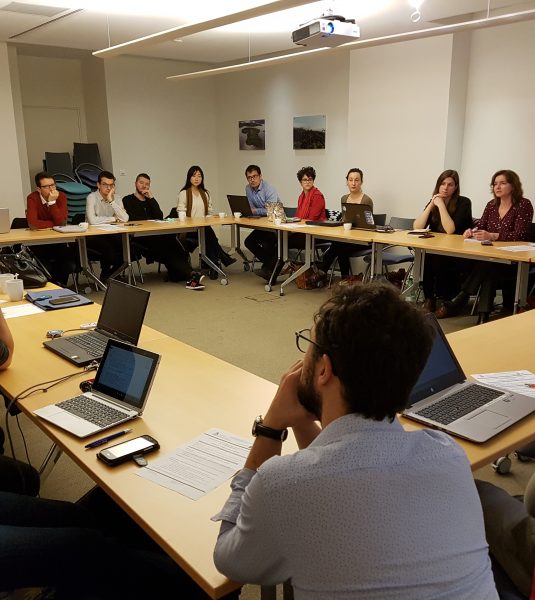 The scientific meeting of the Cancer and Neurosciences axis of the Cancéropôle Nord-Ouest was held on December 3, 2018 in Paris. This workshop, organized by the Cancer and Cognition platform, brought together 30 participants, mainly members of Cancéropôle Nord-Ouest research teams or healthcare centers, but also representatives of Anocef, the OncoNeuroTox network, and GREC-Onco.

This meeting was an opportunity to work on two new themes within the group of experts:

The objective, following this workshop, will be to bring out new research projects on these themes in the coming months, with the aim of setting up new studies in collaboration with the various teams of the Cancéropôle Nord-Ouest and its partners.

Abstracts and materials of the oral presentations [French version]:

The various sleep parameters and their implications for memory consolidation are widely studied in healthy subjects. Although patients treated for cancer complain of sleep disturbances, few studies have rated their sleep quality objectively, and only three have examined the association between sleep quality and cognitive performance. In addition, the limitations associated with these studies (inclusion criteria, lack of control group, in particular) do not allow us to conclude on the modification of the structure of sleep and its influence on the cognition of patients.The PROSOM-K study, thanks to its rigorous and innovative methodology, will bring new knowledge regarding the influence of sleep on the memory of the future intentions of patients treated for breast cancer.

Joy Perrier : Proposal for an intervention in patients with breast cancer

Patients with breast cancer report both cognitive and sleep disorders. Experimental studies also suggest circadian rhythm disorders and psychopathological disorders. In order to act on all these parameters, two intervention proposals are described and innovative methodological approaches are proposed to understand the associated mechanisms.

Elodie Pérès : Radiotherapy and cognition in a preclinical model. Multiparametric study on the effects of cerebral irradiation in rats: from tissue alterations to cognitive deficits Diaporama

Radiation therapy (RT) is a major therapy for primary brain tumors and brain metastases. Due to the penetrating power of X-rays, the tissue surrounding the tumor is also irradiated, which causes neurological alterations that cause the cognitive complaint frequently reported by patients treated with RT. Several preclinical studies have highlighted various neuropathological disorders such as vascular compartment damage, alterations in neurogenesis, neuroinflammation and demyelination. All of these processes were related to the memory and attentional decline observed in patients treated with RT. However, there is currently no experimental argument to conclude on the temporal evolution of these different physiopathological processes in response to the RT and their consequences on the appearance of cognitive deficits. In this context, our research team is conducting preclinical work on the effects of radiotherapy on the healthy brain by evaluating the pathophysiology of radiation-induced brain damage, from tissue alterations to cognitive deficits.

Innovative Partnership for Action Against Cancer